Senior Henry Hawkins served as an intern for Pica & Associates, LLC, an Annapolis law firm that is centered around lobbying during the 90-day session of the Maryland General Assembly. A Political Science major who is also minoring in Economics, Henry’s main tasks included tracking bills, conducting policy analysis, and signing up client representatives to testify at House and Senate committee hearings to discuss legislation. Henry also drafted reports on bill statuses for John Pica, a former Maryland state senator and the founder of the firm, to send to his clients. 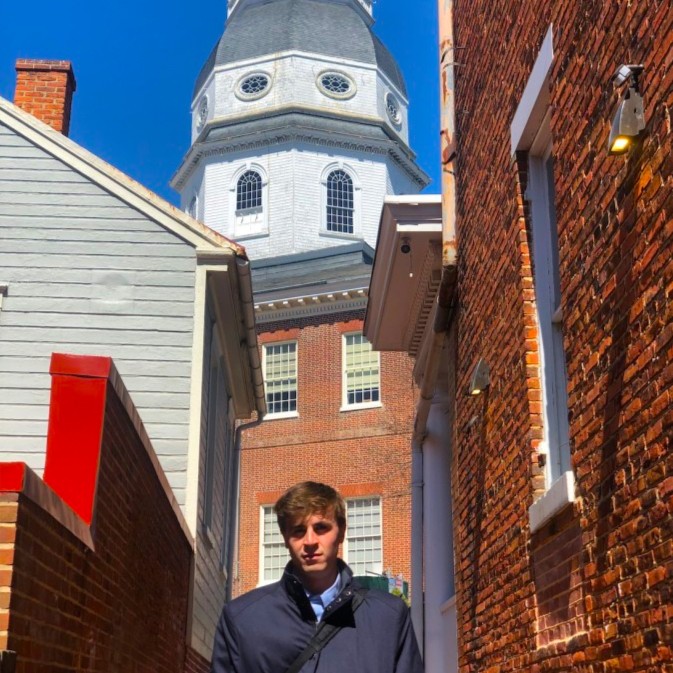 There were multiple highlights during Henry’s experience. The firm extensively lobbied for SB0636 (End the Wait Act) and HB1255 (Education - Physical Restraint and Seclusion - Limitations, Reporting, and Training). Henry stated that both of these bills “provide additional funding programs for behavior and mental healthcare facilities” and their passing was in the best interests of two of the company’s clients, the Children’s Guild and the Nexus-Woodbourne Center for Family Healing.

“The passing of these bills in my opinion promoted ethical public policy and it was really cool to be a part of the lawmaking process,” Henry said. “Meeting legislators was a really neat experience, but also meeting executive on the other end was really interesting too as I met with high level employees from Royal Farms and the Chesapeake Employers’ Insurance Company.”

Henry gained an in-depth understanding of the legislative process and how a bill can become law. In essence, he said, “it’s very hard to survive a legislative session as a bill.” He learned that lobbying involves many different actors, from interest groups, companies, and individuals, and that it can range from executive lobbying companies to grassroots organizing — “I didn’t realize anyone from the public can register to be a lobbyist,” he said. “The lobbying company I worked for was very transparent with the Maryland public, even going as far as to lobby for individuals who called our offices with issues they had with bills being introduced.”

Prior to his role at Pica & Associates, Henry interned for the Behavioral International Economic Development (BIED) Society, an international affairs and economic development think tank. Henry was placed in this internship through The Washington Center, which is a non-profit organization that connects undergraduate and graduate students with internships in the Washington metropolitan area. Washington College’s Career Center has a relationship with The Washington Center, and Henry credits this as to how he was able to apply for the program. “I received 12 academic credits interning [with the BIED Society], which put me ahead credit wise,” he added.

Henry recommends that students “always use the Career Center as much as possible and to use professors in your department to help develop your transition from college to the working world.”