This resourceful pair of alumni are raising the curtain on opportunities for graduating fellow theatre majors. 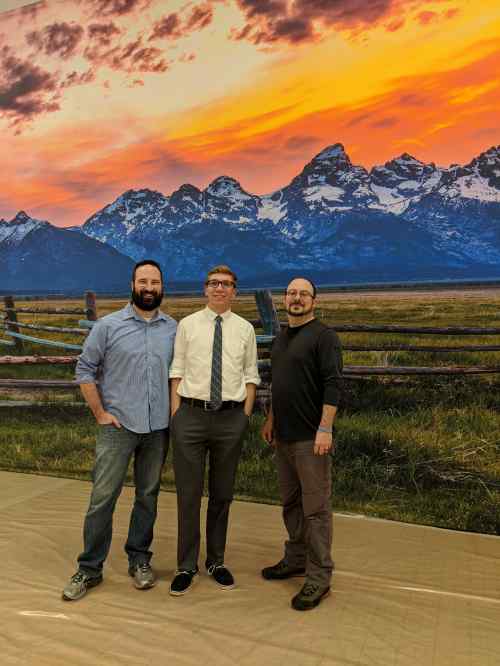 College pals Matt Biringer ’05 and Greg Schaefer ’07 remember well the challenges of staging plays as theatre majors at Washington College. The limited resources. Academic demands. The uncertainties of pursuing acting careers after graduation. But they also remember the collaborations and kindnesses that fueled their confidence and made them believe. Which is why they returned to campus one spring as honorary producers, to see a performance of Aladdin del’Arte for which they donated funding and production supplies.

“They had some front-row seats reserved for us,” Schaefer says. “We spent the night in Chestertown, saw the show, had a few drinks at the Bluebird afterwards. It was nice to visit with the school as you would an old friend.”

It was a homecoming not only to campus, but to a tradition of lending a hand. “There was a culture of giving back from the moment I started in the theatre department,” Biringer says. “I worked with folks professionally years later in Philadelphia who were seniors when I was younger at WAC. So there was always this idea that you try to help the next person up.”

“It’s not always easy to put up a play in Chestertown,” Schaefer says. “It’s a small pond. I remember worrying about how I was going to stage my thesis, and where I was going to source props. If we can offer a little bit of help, we’re always here for that.”

Today, the two are co-workers at Rose Brand, a primary national provider of custom hand-sewn drapes, fabric, and production supplies for the theater community and other entertainment, event, and display venues. Through their sales and project management roles, Schaefer and Biringer have found a niche that keeps them connected to the stage they still love.

Both claim to have majored in theatre at Washington College almost by accident, a passion that grew out of their respective roles in friends’ Senior Capstone productions. Schaefer took the stage for The House of Yes, and Biringer was only a freshman when he was cast as Roy Cohn in Angels of America. The department also offered practical experience and a strong network. Both Biringer and Schaefer credit Michele Volansky, chair and associate professor of drama, as a valuable link to creative opportunity. “She has lots of connections in Philadelphia and elsewhere,” Biringer says. “She’s fostered dozens of young artists in the Philadelphia area from WAC.”

After their graduations, both Schaefer and Biringer were actors for a time before each moved into scenery and other theater production work. In 2012, Biringer took a job with one of his favorite suppliers, Rose Brand, and one day he got a phone call from a familiar voice. Schaefer was working for an event company in New Jersey and had called Rose Brand for supplies. Biringer greeted his old friend with “Hey, Greg, it’s Matty B!” And when a job opened up at Rose Brand a little later, Biringer tipped off his old pal. They now sit back to back, “performing daily on the phone,” Biringer says, for clients across the United States and abroad.

Their partnership keeps Washington College on their minds, especially the students who are following in their footlights.

“We have a lot of contacts with people in the theater world and in production that we’re always happy to help students explore,” Schaefer says. “Our goal is to always be conduits for WC students. We helped with a panel last spring with the outgoing seniors, just talking about career opportunities.”

“We’ve talked about having the students come up and tour Rose Brand and Infinite Scenic, where my wife, Mel, paints, and talk to some professional scenic artists,” Biringer says. “I think about the externship programs [WC offers], and I think our company could do that. And Greg and I may come do a master class some day.”

The duo has continued to send fabric and other supplies from their employer to WC’s grateful theatre department. They see themselves as part of an unbroken chain of drama alumni who keep the acting dream alive. “For recent graduates, it may be difficult to write a check,” Schaefer says. “But focusing on the nonmonetary gifts that alumni can share can really involve those who have something to offer the students or College community.”

“Part of why we want to give back is that we eked out every minute we could in Chestertown, really dove into a lot of areas of the school and enjoyed ourselves,” Biringer says. “It just seems to be a no-brainer to give back."