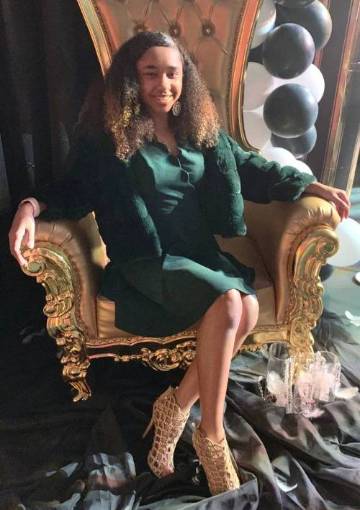 Speaking Out for Racial Justice

The President of the Black Student Union is driving diversity initiatives on campus.

Stepping on campus as a freshman, Destiny Harris ‘21 thought she had it all going for her as an outspoken, funny, and honest Black woman. But after a racial slur stopped her in her tracks, her activism kicked into gear. Since then, she’s never looked back.

Backed by many of her peers, Destiny’s strong voice speaks for the black community on campus—urging the College to respond to incidents of racial bias with a greater urgency and clarity. Putting her heart on the line, she’s beyond excited for the change that’s beginning to surface.

“Things are finally breaking through,” Destiny explains. “We’ve just got to keep the fire lit, keep the momentum going.”

Excited to head back to campus, albeit virtually, this fall, Destiny isn’t just thrilled for her impending graduation, but eager to lead the Black Student Union. “Fundamental and systematic changes are coming,” and she’s ready to keep her drive going both physically and mentally.

Destiny knew she could expect her course in African-American literature to carry a heavy reading load. What she wasn’t expecting was the phenomenal lineup of novels that Professor Alisha Knight had chosen. “I was flying through the pages! I couldn’t get enough of those books.” Better yet, the conversations that followed were just as engaging.

Ready to see legislation in action, Destiny traded in the political science classroom for an office and headed to Baltimore to intern for NARAL Pro-Choice Maryland, an organization that fights for the reproductive rights of all women. “Seeing the tiny details that go into writing a piece of legislation really helped me understand how the law works.” As an intern, Destiny worked with women’s shelters, clinics, hospitals, and colleges along the Eastern Shore to coordinate better access to emergency contraceptives — an initiative backed by NARAL’s current legislative actions, as well.

After a racist incident stopped Destiny in her tracks, she wasn’t just scared for the future, she was furious and ready for change on campus. Confronting the administration with confidence, Destiny fought to make sure they heard not only her voice, but also the voice of all black students on campus. “This could have been your daughter, your niece, your nephew,” she reflected, “physically afraid to take another step on this campus.” Urging the College to respond to incidents of racial bias quickly and with stronger communication, Destiny continues to lead the fight against racism at WAC and beyond.

While an online senior year wasn’t on anyone’s graduation checklist, Destiny is still looking forward to congressing virtually with the Black Student Union and continuing her internship into the fall semester. As things are finally breaking through, fundamental and systemic changes on campus are here, and Destiny couldn’t be more excited to play a role. Beyond graduation, Destiny plans to jump right into politics in one way or another—ready to help people, no matter what role she’s in.