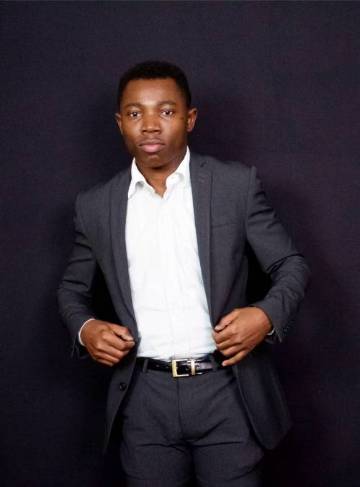 According to cultural expectations, Haitian emigrants can’t go home again until they have something meaningful to show for their time away. For Ervens Jean-Pierre ’20, that will be his college degree and his commitment to give back.

Ervens Jean Pierre ’20, an international studies major from Haiti, has learned a few things about himself over these past four years.

“I’ve come to realize that I like to help people,” he says. “And you can do that best when you open yourself up to opportunities. You have to take the first step and get involved as much as you can.”

He has done just that.

Under the guidance of international studies professor Tahir Shad, Ervens completed an internship in the Philippines and participated in the World Model United Nations in Panama. Supported by the Starr Center’s Explore America internship program, he spent a summer interning at the National Constitution Center in Philadelphia. And in addition to serving as vice president of the Black Student Union and as an ambassador for students of color, Ervens participated in the Chesapeake Heartland Project, a Starr Center initiative that is preserving local African-American history.

“I loved doing that research,” Ervens says. “We talk about slavery, but we forget about the lives of the people impacted by slavery. I really appreciate that I got to see documents about people who might otherwise be forgotten. For me as a black person, I felt I was doing justice for these people who created businesses and churches and communities, and whose stories deserve to be told. That was a life-changing experience for me.

Ervens grew up in a multi-lingual household. His dad was a professor of international studies, and his mother was active in politics—an outspoken opponent to the Duvalier dictatorship in Haiti. In 2012, he and his family moved to the United States, where Ervens earned his high school diploma in Howard County, Maryland. His first college acceptance letter came from Washington College, and a campus visit sealed his decision.

“I want to be a diplomat,” Ervens declares, whose interest in immigration law inspired him to study abroad in Brazil. Hundreds of Haitians moved to Rio and Sao Paulo to help build infrastructure needed when Brazil hosted the World Cup in 2014. They remain—with much-diminished job opportunities—in the wake of Brazil’s economic decline.  Many of them now live in favelas—make-shift neighborhoods that lack government support. During his semester abroad, Ervens interned with Haiti Aqui, a non-governmental organization that helps Haitians with housing, health care, and education and that encourages them to become more integrated in Brazilian life.

“I hope to return to Brazil one day soon,” Ervens says. “The food, the culture, the people—there’s nothing about Brazil I don’t like.”

For someone who grew up speaking Haitian Creole and French, and who went on to learn Spanish and Portuguese, this was a powerful class. Ervens was drawn to the ideas that language shapes people, cultures, and policies, and that the way people use words can define their social, political, or ideological standing.  Words definitely matter.

Through this project, sponsored by the College’s Starr Center for the Study of the American Experience, students are helping members of the local African-American community document and digitize their family histories. “For me as a black person, I felt I was doing justice for these people who created businesses and churches and communities, and whose stories deserve to be told.”

During his studies at Pontificia Universidade Catolica do Rio de Janeiro, Ervens also interned with a non-governmental organization called Haiti Aqui.  He fell in love with the people, the food, and the culture, and became particularly interested how Haitian immigrant populations could become more integrated in Brazilian life. “There is nothing about Brazil I don’t like.”

Looking Forward To The LSATS

After completing his Senior Capstone Experience on corruption and cultural apartheid in Haiti, Ervens plans to go to law school to study immigration law. His goal is to become a lawyer and a diplomat. “As a Haitian immigrant, I want to give back.”