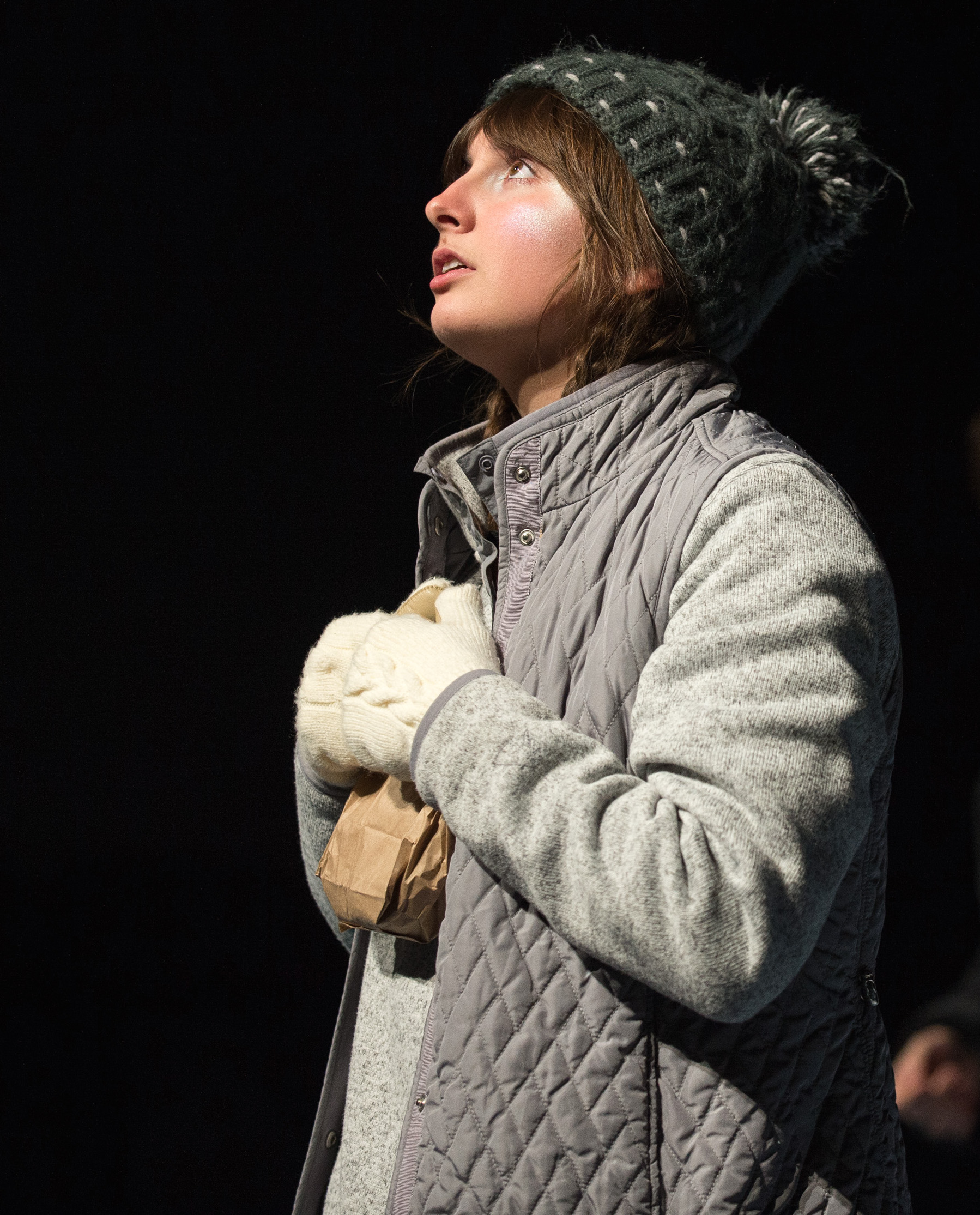 Stepping into the Spotlight

On November 16, 2019 a crowd gathered in Tawes Theater for an experience that will never again be recreated—an hour and a half later there wasn’t a dry eye in the house. I and You, by Lauren Gunderson, a senior directing thesis from Hannah Sauer was a captivating, intelligent and thoughtful production about how we connect to others and the legacy we leave behind.

I and You features high-schoolers Caroline, who has been homebound due to an illness, and Anthony, who barges into Caroline’s bedroom with an urgent English project regarding Walt Whitman’s Leaves of Grass.

Hannah’s journey to closing night of her SCE was a long one, which began her freshman year in Acting I with Lecturer of Drama, Polly Sommerfeld.

“I took an introductory acting class to fill my fine arts requirement and I loved it. As I realized I didn’t want to study political science I realized I might want to study theatre. Polly is the reason I looked into studying theatre in the first place; to have Polly in class giving me compliments on my work was crazy because I didn’t think I’d be good at it. She encouraged me to audition for Drama Draft and funnily enough I got cast! Now I’m getting my degree in theatre, and Polly is the reason I’m here.”

The relationships Hannah made throughout her time at Washington College have been monumental in creating a support system that Hannah credits to changing her life.

“I was very quiet and kept to myself when I arrived at WC. I didn’t want anyone to see me or notice me; I wanted to blend into the background. It’s very easy to try new things here and I tried to take advantage of that. I leaned into new experiences and I had people backing me up telling me even though I might not have experience in this field, I’m doing a good job. That helped a lot in my confidence; I’ve learned to have confidence in my work and what I’m doing. I’ve really seen that in my thesis process and that’s exciting. I’m more okay with being seen. It may seem small, but it’s the biggest difference in how I act and how I feel.”

Hannah believes each of the theatre professors push her to learn the most about herself through the trust and freedom they offer students working on productions.

“We get so much power and agency to decide what were doing when we work on a show and when we choose our thesis, it helps prepare us to figure out what we want to do with our lives post-graduation. The department allows students to be hands on every step of the way. It makes it so much more fulfilling when it’s done. We are so lucky to have that opportunity.”

“The professors want to see us succeed, they’re like, ‘go do it!’ and they support you on that, whatever it is, but they also give us room to learn on our own. How much they trust us—it's mutual. We trust them to tell us if we aren’t doing well. I know I can go to them at any time; their doors are always open. They’ve helped me learn to trust myself and my ability to do things. Where I was freshman year versus where I am now, they’re all a part of that.”

Hannah began preparing to direct I and You her junior year, but only after long conversations with each of her theatre professors. Theatre majors propose the play they want to produce and the discipline they want to showcase for their SCE fall semester of their junior year.

“When we were proposing our shows the professors said to all the rising seniors ‘you pick our whole season,’ and that doesn’t happen at other schools. The professors don’t want you to limit yourself, they’ll limit you when they need to – purely on the logistics of being a small department – but they don’t want you to limit you. It's a very adult conversation which is really cool. They say, ‘prove to us why you should do this,’ and then you do.”

While Hannah believes she would not be where she is today without the support of others, it is easy to see the talent and hardwork bubbling out of Hannah and into everything she does.  Hannah has performed in student and faculty productions adding skills such as: performing multiple defined characters in the same show, performing as the opposite gender, and pantomiming to her repertoire.

“Being on stage, as someone who wasn’t used to being noticed, was a crazy feeling. I would get really nervous and I’d start laughing from nerves, I’d get cotton mouth and I couldn’t speak (which still sometimes happens),” she explains.  “These Shining Lives was the show where it really switched. I started the show with a monologue in a theater filled with people, and that was when it clicked: I want to do this for a reason, someone gave me this role for a reason, I should have confidence in myself and do it. That feeling of being content with what I'm doing has changed my whole outlook.”

Hannah played Catherine in These Shining Lives by Melanie Marnich –a directing SCE by Rachel Treglia– where she performed as the lead, despite being ill with strep throat for both performances.

Because Hannah made a name for herself as an actress in the theatre department, during her SCE proposal junior year she had to defend why she wanted to direct rather than act.

“I took Directing I with Prof. Dale Daigle and I really liked it; I wanted to use the knowledge I’ve accumulated throughout the department and convey it to others and use it to tell a story. I could have challenged myself as an actor, but I wanted to challenge myself in that way. I’ve held leadership positions before, but this one felt more daunting: taking on a whole show, being in charge of a group of people, and being confident in my work—that affected everyone else’s work. As a director you have to have a vision, and everyone’s work has to work toward that vision. I love directing, I’m really lucky. This has been the turning point for me in proving to myself that I can do things, and do them well.”

As the lights came up and the actors bowed, The Lumineers’ “Ho Hey” played throughout Tawes Theater and I and You, a senior directing thesis by Hannah Sauer, received a standing ovation.

“Polly is the reason I looked into studying theater in the first place; to have Polly in class giving me compliments on my work was crazy, because I didn’t think I’d be good at it. She encouraged me to go out for Drama Draft, so I did and I was cast! Acting I led to me getting my degree in theatre.”

Learn By DoingActing in Almost, Maine by John Cariani, a senior directing thesis by Abbey Wark

“Almost, Maine was the first full-production play I was cast in; which was a completely new experience for me. It was a very collaborative process. I played three different characters (Glory, Marvalyn, and Rhonda), it was a challenge defining and understanding each of them.”

“Being a peer mentor helped with my confidence a lot as well, I share with new students why I love the school, and help them through their transition into WC; which my peer mentor really helped me with, so it is nice to pass it forward onto other students.”

Learn By DoingSenior Capstone Experince: Directing and producing I and You by Lauren Gunderson

“Directing was going to be my challenge: taking on a whole show, being in charge of a group of people, and being confident in my work— that affected everyone else’s work. As a director you have to have a vision, and everyone’s work has to work toward that vision.”